After completing the arms, we move on to crocheting the legs.

Work 8 more sc (to the middle of the back) and change to red.

After crocheting her legs, it’s time to build her body.

Make 3 ch from the second leg and join the chain to the first leg, then work;

Rnd 23: Crochet the arms in this round symmetrically on the sides, 18sc

Next crochet the head, do not cut off the thread.

We crocheted the body of the crocheted Santa Claus, now we are making the head part.

We’ve come to this point step by step, we don’t have much to do now, the process now is that magnificent beard of Santa Claus.

White textured yarn. Leave a long thread end in the beginning to use it for sewing the beard. Work in turning rows: make 1ch and turn in the end of row.

Rnd 1: 7ch, starting from the second stitch from the hook 6sc

Cut off and secure the thread, weave in the end.

After crocheting your beard, the last part remains to make the hat and then the amigurumi santa claus pattern is ready.

Make 27 ch with the red yarn and join the chain in a circle with a slst. Work in rounds.

Cut off the thread, pull the stitches with a needle, weave in the ends.

The hat is ready.

1. Glue on the eyes between 5th and 6th rounds of the head (counting from the beginning of crocheting the head), there are 6 sc between the eyes. Embroider a nose with the beige yarn between 4th and 5th rounds, 2 sc wide.

2. Sew on the beard under the nose.

4. Embroider a buckle on the black belt with a fine yellow thread, width is 2 sc, height is 1 sc. 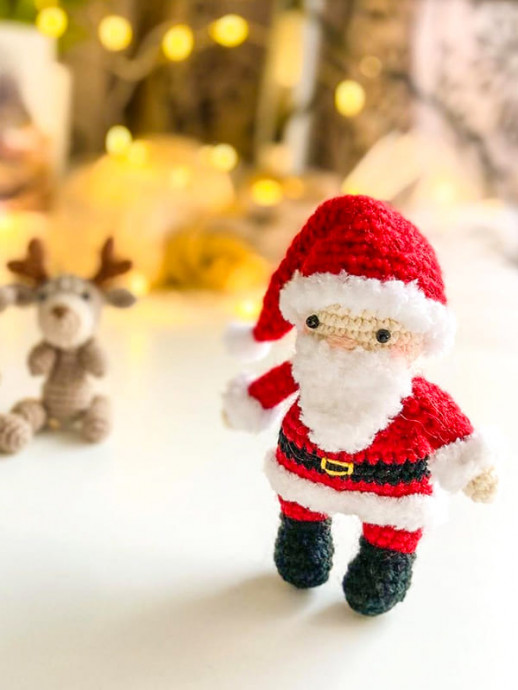 Shdonna ​Crochet White Pullover with Black Stripe
2 hours ago
I am not crocheting right now i would love to try ...

Bev ​Violet Wrap Up Vest
11 hours ago
The pattern for the cute purple vest is clear as m...

Susan Hello
16 hours ago
Hello! We are pleased to see you among crochet lov...

Susan ​White Crochet Blanket
16 hours ago
It's written in the pattern where to change croche...

Sarah Walker ​White Crochet Blanket
22 hours ago
Where does the 5mm hook come in?? And where did th...
↑