Sewing needles for the eyes (or safety eyes).

Cut the yarn, fasten off and make another one.

Cut the yarn and fasten off.

Make another one following the same instructions.

Don’t fasten off the second leg and connect the two legs by inserting the loop of the needle inside one stitch of the first leg, following,

Stop here to start adding stuffing material in the Grinch. To do this later on, it’s a bit hard.

Cut the yarn and fasten off.

Add a couple of strings on top of Grinch head, and make the yarn a bit fuzzy.

With white yarn chain 4. Skip the first chain and,

Embroider the eyes in round 27 leaving 2 stitches between them.

Embroider the nose two rounds under the eye, in the central part of the face.

Embroider a big smile starting in round 24 and going down until between rounds 19 and 20.

For the eyebrows, you can choose which expression to give your Grinch. If you want a mad version of a Grinch, make the lines for the eyebrows in a V shape. 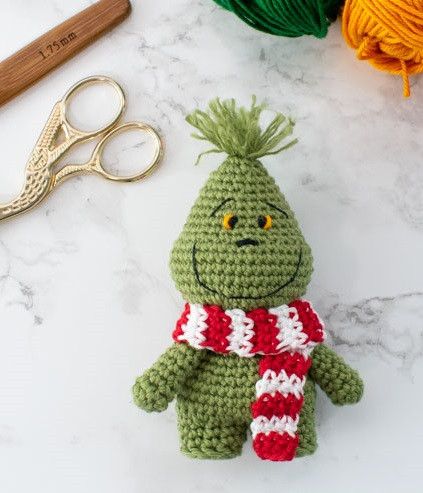 Shdonna ​Crochet White Pullover with Black Stripe
42 minutes ago
I am not crocheting right now i would love to try ...

Bev ​Violet Wrap Up Vest
9 hours ago
The pattern for the cute purple vest is clear as m...

Susan Hello
14 hours ago
Hello! We are pleased to see you among crochet lov...

Susan ​White Crochet Blanket
14 hours ago
It's written in the pattern where to change croche...

Sarah Walker ​White Crochet Blanket
20 hours ago
Where does the 5mm hook come in?? And where did th...
↑